GlobeMobiles.Com
Home Blog Android Oreo is the final name of next Android: Here are top...

Google has finally announced next Android after a lot of guessing by the people. The next Android 8.0 will be called as “Android Oreo” and this is the second time in Android’s history when Google partnered with any brand to use the name on commercial level; first time it was with Android “KitKat” when the company had to teamed up with Nestle who was representative owner of that brand and this time with Mondelez which holding rights and administrative for the Oreo brand.

Therefore, we can expect Google will start pushing soon the final version of Android “O”, at least for Pixel device, though, the company has already provided 5 Beta preview to fix the known bugs. The search giant also confirmed that by the end of this year, you might start getting this update if you are having such a brand included Essential, General Mobile, HMD Global, Huawei, HTC, Kyocera, LG, Motorola, Samsung, Sharp, and Sony. Moreover, below are some interesting features on Android O:

The Android O comes with the redesigned setting menu which features subtle dark gray text on an all-white background. Strangely, the side navigation menu introduced in Android Nougat is gone, but all of the various menus have been reorganized to make the Settings area as simple and straightforward as possible. 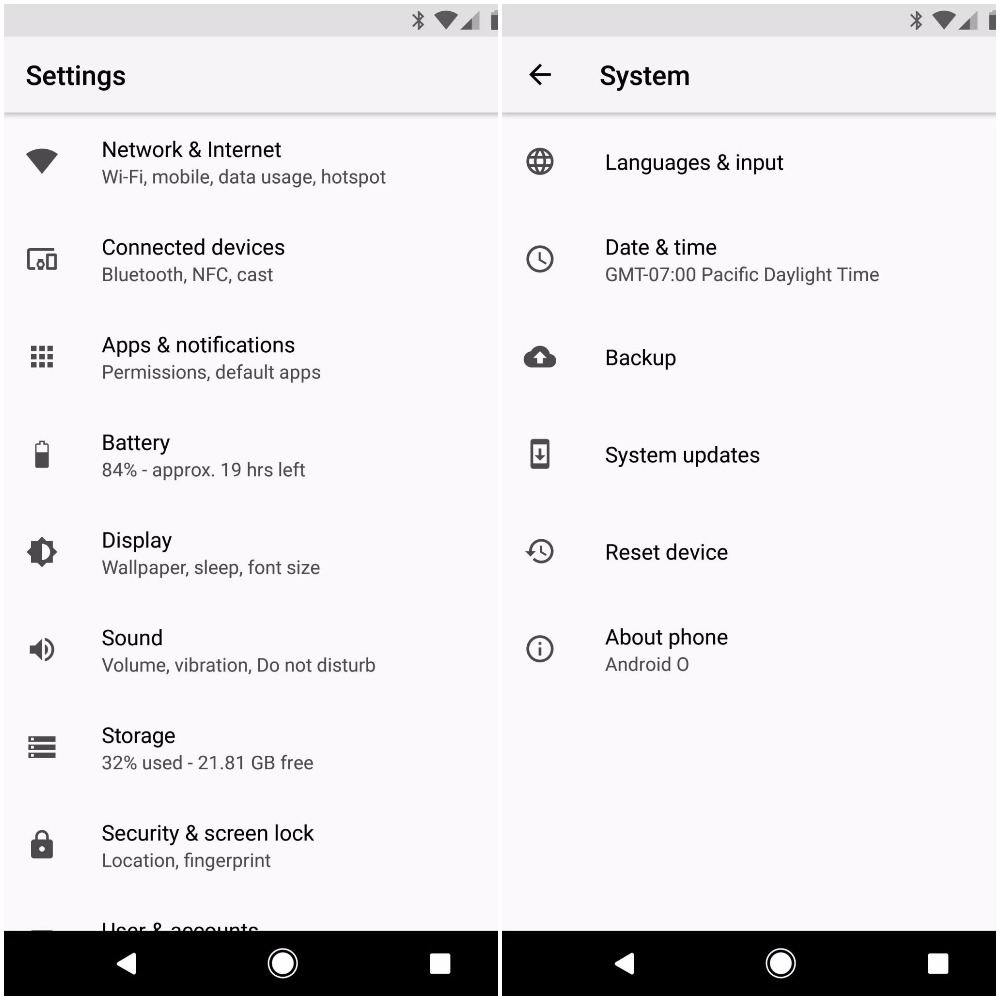 Google is making significant efforts to provide a best possible way to bring optimized battery performance and The past few Android updates have seen a lot of features such as Doze mode and Doze on the go aimed at improving battery life. With Android O, Google is going to take it next level with the better restriction on battery eating apps. The next update will ensure that apps won’t run wild with background services or keep listener services open at all times.

Google has introduced a new feature called PIP after launching split screen mode. It will allow users to minimise whatever video they are watching and watch it while using another application. Though apps will need to be updated to support the new API, still, Google didn’t integrate this feature into new update app but hopefully will do before Android O’s final version.

With the Google Pixel and Pixel XL launch, Google introduced the Pixel launcher which brought rounded home screen icons. Moving to the Adaptive icons, With this new feature in Android O, developers can create a single, unified app icon, and the system will do the rest. This feature will allow icons to quickly adapt to whatever environment they are in, any custom UI provided by 3rd party OEM’s like TouchWiz, Oxygen or any other.

The battery menu in Android O has got redesigned visuals with an entirely fresh look. Standard battery-related options such as Adaptive brightness and Battery saver are now near the top of the menu for easy access, and the battery usage graph is a bit easier to read. But the most interesting change here is a set of statistics at the bottom of the main menu, which tells you specifically how much of your battery was used by mobile network scanning and the device’s display. 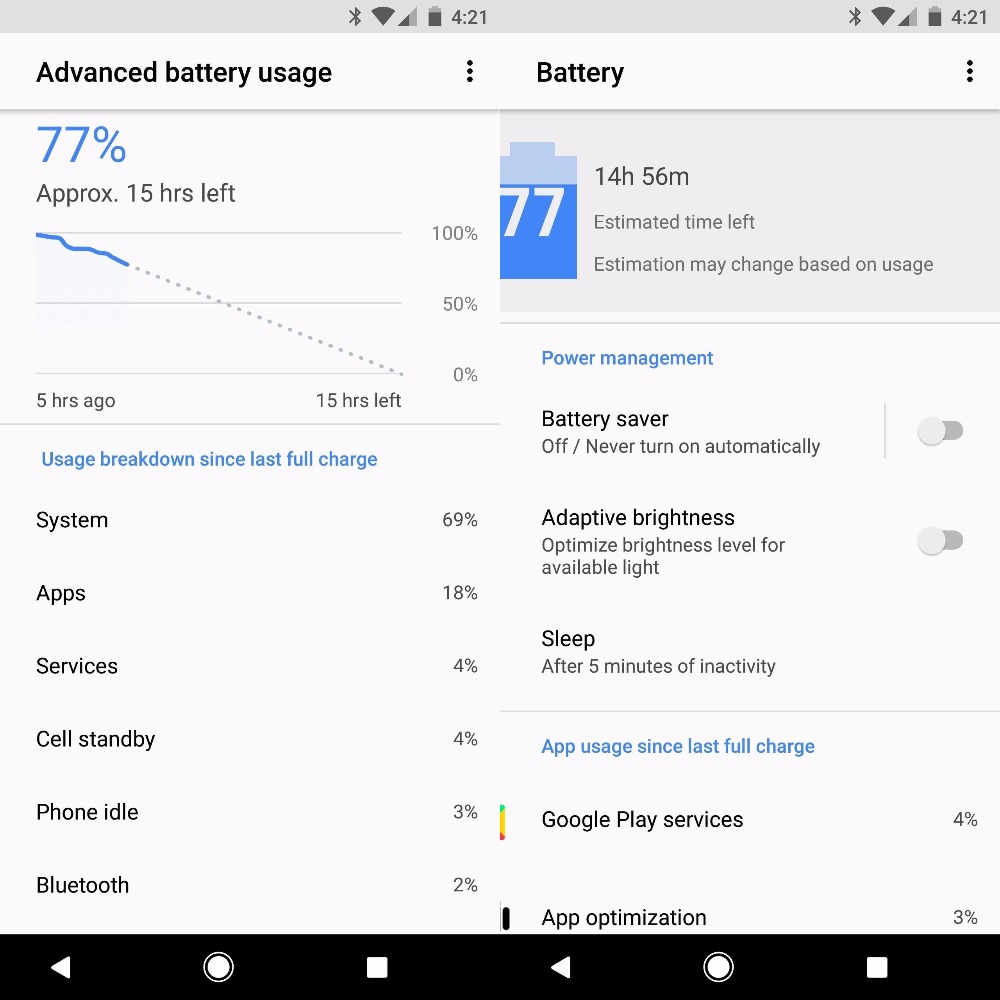 With Android O launch, Google made several changes to enhance the audio experience. The Android O comes with support for high-quality audio codecs such as LDAC. Apart from that, Google is also introducing AAudio – a new native API for applications needing support for high-performance, low-latency audio.

Android’s Inbuilt file manager always gets criticism for lack of required features. The current file manager is not the best one but enough for basic work. But there are lot more advanced apps available in play store like Fx File Manager or Solid File Manager which do a much better job the Android’s default file manager.

With Android O, Android O File app get a bit of new makeover, but still, Google has to do more work to give ultimate experience.

With Android O, Google is adding platform support for AutoFill. Once users select which AutoFill app they want to use, it will be able to fill passwords and other details across the whole operating system. Autofill already available in specific Android apps like Chrome, Massage but not the part of the entire OS.

Android OS needs to enable unknown sources to install any APK file outside play store. But in Android O things are going to change. You’ll now also have to grant permission to the app you’re using to download the APK.

For example, if you want to download an APK via Chrome, you’ll first be prompted to give Chrome permission to install other apps via the “trust apps from this source” toggle in the special access section of the apps and notifications setting. You only need to do this once per app, however, and you can always revoke permission at a later date.

These are top Android features and lot more coming. We will add more features at the time of testing Android O preview. Hopefully, you enjoyed this article. 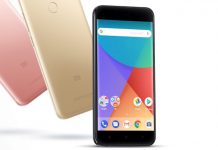 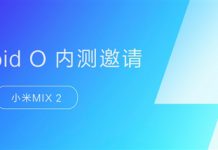 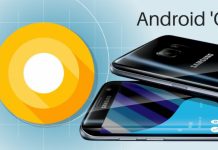