Nokia recently announced the Nokia X7 smartphone in China. At the same time, the device was speculated to be Nokia 7.1 Plus for the global markets. Now, a variant with model number TA-1136 has been certified by the Bluetooth SIG and comes with the Bluetooth 5 support. Unfortunately, the listing doesn’t reveal the rest of the specs as always, but we can expect the same specs as we get on the Nokia X7.

It will be backed by the 3,500 mAh non-removable battery paired with an 18W fast charger to charge 50% battery in just 30 minutes. It runs on Android 8.1 OS out of the box. The smartphone measures 155 ×75.8 ×7.97 mm weighs 185 grams. All the essential connectivity features should be present in this device included VoLTE, 3.5mm jack. The device will be embedded-in rear-mounted fingerprint sensor as a security feature.

It will worth noting that all the above-mentioned specs are borrowed from the Nokia X7 and if everything goes as expected we will be having similar specs, but there might be minor changes. For final confirmation, we will have to wait for the official confirmation, which isn’t yet confirmed. 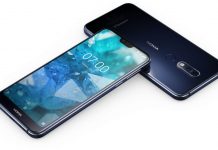