Kirin 980 vs Snapdragon 845 vs Kirin 970 Comparison: The Chinese firm Huawei has just unleashed its next-generation HiSilicon Kirin 980 chipset with a compressive upgrade over its predecessor Kirin 970. The processor directly competes with the industry leader Qualcomm’s Snapdragon 845 in most aspects and highly power efficient as it is world’s first chip built on TSMC’s 7nm architecture. In this article, we are going to compare Kirin 980 vs Snapdragon 845 vs Kirin 970 comparing their capabilities and specs. Hence, without wasting any time, let’s get into it:

The Kirin 980 employes the tri-cluster octa-core CPU, where 2x Cortex-A76 cores are clocked at 2.6GHz, rest two restricted to 1.9 GHz and 4x Cortex-A55 cores are clocked at 1.5 GHz. When it comes to Snapdragon 845, the chip utilizes dual-cluster octa-core CPU with custom Kryo 385 cores, which goes up to 2.8 GHz. On the other hand, the Kirin 970 also have octa-core CPU, but with less powerful Cortex-A73 and Cortex-A53 cores with up to 2.36 GHz clock speed. 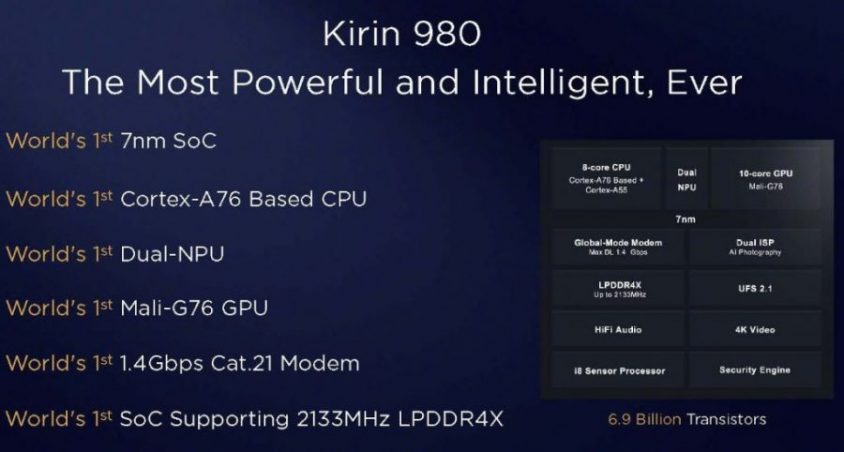 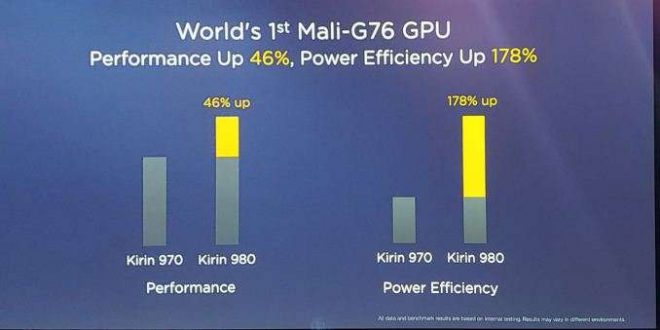 Considering the GPU, the Kirin 980 brings the Mali G76MP10 GPU, and become the first processor to adopt this GPU. The Mali G76 designates a heavy improvement over the G72 GPU used by Kirin 970. According to the Chinese firm, the Kirin 980’s G76 will produce a 46% performance boost and mighty 176% better power-efficiency over its predecessor.

Definitely, the company is doing a fabulous job to enhance its GPU capabilities, but Qualcomm’s Adreno 630 still offers the better optimizations and smooth gaming experience due to remarkable GPU performance. It is too early to judge the Mali G76MP10 as we haven’t available. At least on paper, Mali G76 is more powerful than the Adreno 630.

Besides, the Kirin 980 also using the dual-core dedicated NPU (neural processing unit) to provide enhanced processing. To provide enhanced AI experience, the NPU comes into play. The company claims that the NPU is well-capable of increasing the performance by up to 134% and reduce the power consumption by up to 88%. On another side, Snapdragon 845 relies on DSP 685 for AI tasks.

The internet world is growing so fast and soon we are going to enter the 5G world. Taking this into consideration, company has provided a faster LTE modem, which can provide up to 1.4 Gbps download and 200 Mbps upload speed, which is a slight improvement over Kirin 970’s 1.2Gbps download and 150 Mbps upload speed. Qualcomm’s LTE X20 Modem delivers up to 1.2 Gbps download and 150 Mbps. Technically, Kirin 980 has a faster LTE modem, but for an average user, it is a dream to achieve to Gigabit speed, hence, it won’t affect to a common user.

Furthermore, Kirin 980 comes with upgrade Dual ISP, which according to the company is 46% faster than the Kirin 970. The Snapdragon 845 also offers dual ISP cameras with up to 32 MP single and dual 16 MP + 16 MP cameras, although sensor size isn’t mentioned by the Huawei, it should be sufficient to support any size of the camera as the company is known to produce camera-centric smartphones. All the three chipsets support LPDDR4X RAM and the industry’s current standard of UFS 2.1 storage. The display supported by all the chips is up to 4K UHD, still waiting to see Huawei smartphone to utilize the max. resolution.

Apart from that, Kirin 980 has about 3,360 single-core scores, which is way better than the Snapdragon’s approx. 2,400 scores. Keeping it aside, Kirin 970 is weakest among these with only scoring approx. 1,800 to 1,900 single core results. Benchmarking scores also confirm that Kirin 980 has one of the fastest mobile platforms.

Surely, Kirin 980 is one of the fastest processors available in 2018. The chipset offers fastest CPU, great power efficiency and a powerful GPU for graphics-intensive tasks. But as of now, these are on-paper specs, we have to wait for the final units to acknowledge the end-user experience. On the other hand, Snapdragon 845 is used by most of the current flagship by the different OEMs and delivering smooth performance, But 970 is way behind these two processors. What do you guys think about these chipsets? Do let’s know in below comment section! 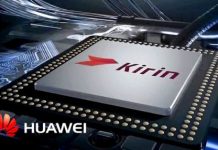 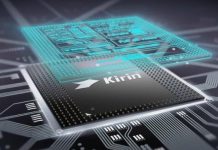