Samsung recently launched a new smartphone called Galaxy On8, a modified version of Galaxy J7 (2016). The smartphone comes with a 5.5-inch 1080p Super AMOLED screen, a 3,300mAh battery, 3GB of RAM and the Exynos 7580 processor paired with Mali-T720MP2 GPU. The device is priced at Rs 15,990 on Flipkart in Gold, White colors and competing with Moto G4 Plus in the price segment. We will compare both devices in a separate article.

For many years, Samsung was known for making plasticky handsets with mediocre build quality and bulky looking design. But samsung start improving their smartphone design with Galaxy S6 and S6 Edge was another successful effort with curved edges display. I m talking about all this because Samsung also improved the mid range segment devices as well.

Coming to galaxy On8, The brushed plastic back looks just stunning and it feels very premium in hands. The removable back is not textured and is very smooth and slippery, with a embossed samsung logo in the middle. The quality of the removable back panel is absolutely abysmal, and feels like it will break with just a modicum of force.

However, the removable back comes with the usual advantages of having a removable battery and easy access to the two SIM card slots and the microSD card slot. the device Dimensions are 151.7 x 76 x 7.8 mm and weight 169 grams, which is pretty impressive. I am totally impressed with look and feel of this device and looks way batter than bulky moto G4 Plus.

This is most highlighted part of this device. The smartphone features a 5.5 inches 1080p sAMOLED display with 401 PPI which looks gorgeous with rich and vibrant colors. I found it one of the best display in the market at this price point even more. I compared it with my s7 edge, i know it does not make any sense looking at price of both devices but the on8 was very near to s7 edge’s display. Samsung done a great job to produce the on8 display. I am pretty satisfied with sAMOLED panel. 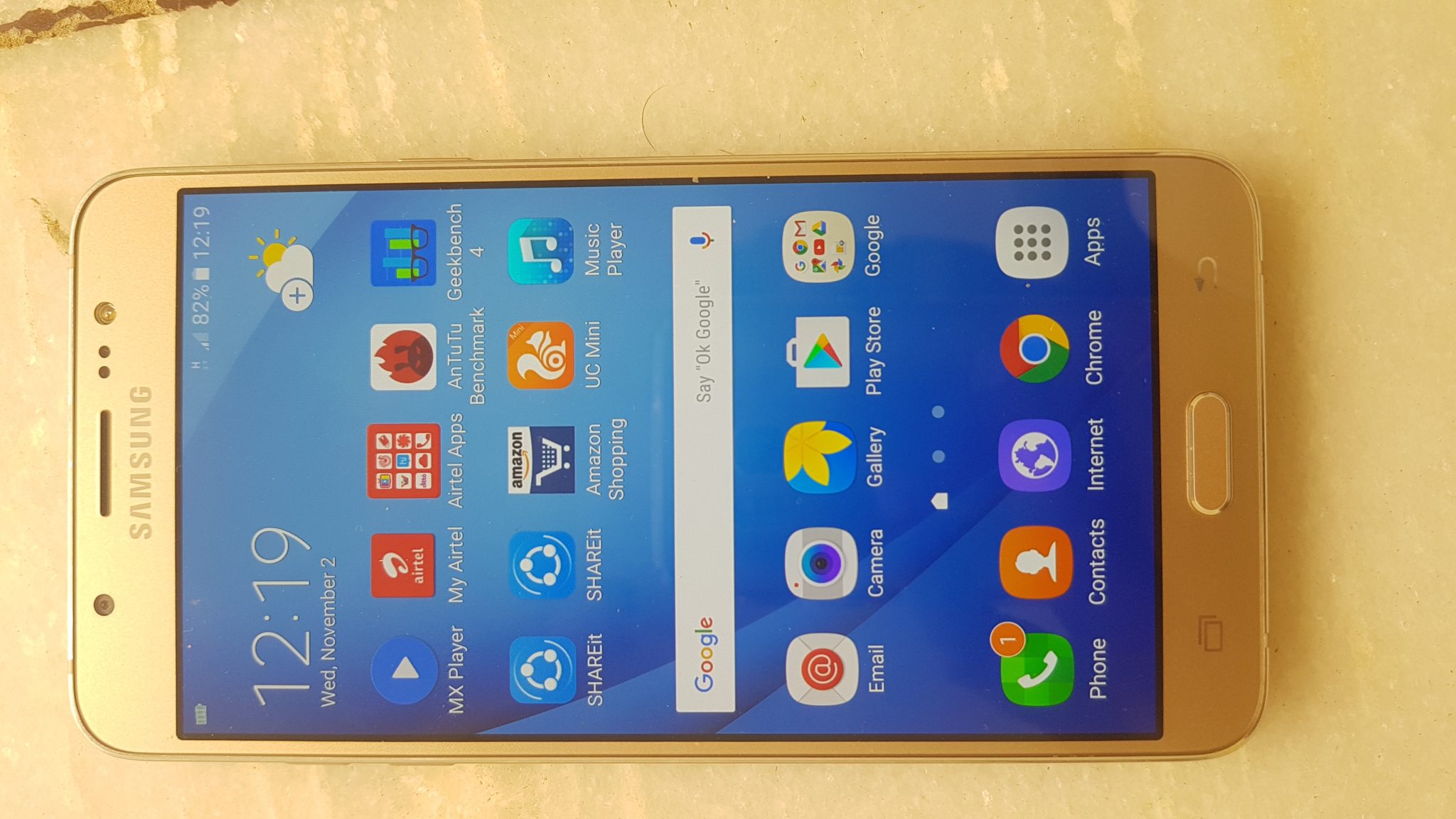 The Samsung Galaxy on8 is powered by Samsung’s own Exynos 7580 processor clocked at 1.6 GHz coupled with a Mali T830 GPU. I would say, the processor of this device is not good. It lags on heavy usage and heats up quickly around the volume rockers while playing heavy games. I tried to run Asphalt 8 and there were many frame drops and was almost unplayable. The device handles normal usage and multitasking very well. This device is not for gamers at all. Overall, i got very smooth experience except gaming.

Coming to benchmarking tests, we have ran Geekbench test and it scored 636 in single-core and 3,000 for multi-core. In other test on Antutu, the smartphone manage to get 42,047 which is average kind of score because other device in this price scoring more. But benchmarking score is not everything on any smartphone, well optimised software experience also can boost the performance of device which Samsung did very well. The smartphone runs on Android 6.0 marshmallow based on TouchWiz UI.

For storage, it has 16GB of internal storage and bundled 3GB RAM, storage is expendable up to 128GB via SD card slot. The good thing is that it comes with dedicated micro SD slot which is not the case with chinese smartphone makers. Hardware of this device is not on higher side, there are more options available in market with batter specs but Samsung On8 managed to get good overall performance.

The Samsung Galaxy on8 comes with a 13MP, rear camera with autofocus and LED flash and a 5MP front camera with a LED flash. Both the cameras have an aperture of f/1.9.

The rear camera is pretty good and is actually one of the better shooters in this segment. In well lit situations, it produces sharp and vibrant images with vivid colors and deep blacks. The camera is very quick to focus and produces little or no lag when processing images as well.

The front shooter is more than capable of handling your social media selfies and even comes with a LED flash. The inclusion of the flash is big win for selfie junkies, and sets the smartphone apart in the crowd of mid-range handsets. However, it lacks 4k video recording but not deal breaker.

The galaxy smartphone packs a 3300mAh big battery. Samsung optimised the software experience very well which results long battery life. On my usage, i able to get 1 and half day in normal usage and 5 to 6 hours of on screen time which is impressive. Unfortunately, the device does not support fast charging. It takes almost 2 hours to charge it fully. It also comes with ultra power saving mode, which applies a greyscale theme to your device, extends the battery life even further.

Samsung Galaxy On8 overall is a decent device. It offers the SBike mode, decent day to day performance, is good for casual gaming, has a good camera setup, comes with a front LED flash and it’s battery life is very good.

However, it lacks gyroscope and compass sensors and the price of this device is on bit of higher side. But looking at sAMOLED display the device looks justifying the price. According to my usage, Not highly recommended but it is a good device. You can consider this device if you are looking for decent camera, good display and long battery life.