The Snapdragon 670 accumulates the company’s custom Kryo 360 based octa-core CPU cloaked at 2.0 GPU. However, Snapdragon 660 has a higher clock speed of 2.2 GHz, but it packs older Kryo 260 cores with less-optimized CPU. Another big difference is architecture. The SD670 is built on the highly power-efficient 10nm process, while, the SD660 brings 14nm architect CPU. Although, it isn’t bad either but doesn’t compete with the latest technology. 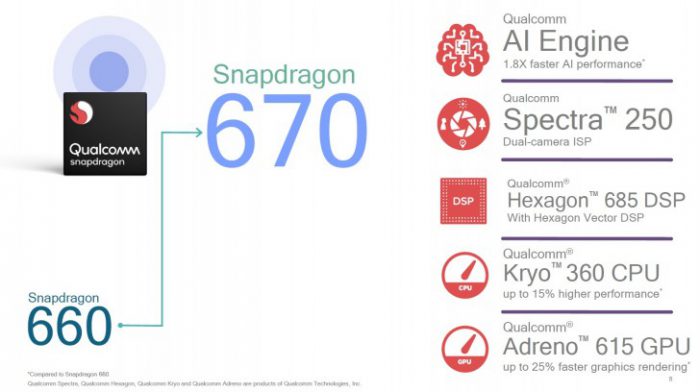 The GPU given to SD670 is latest Adreno 616, which is way more powerful than the SD660’s Adreno 512. The graphics quality should be much better and smoother on the latest GPU compared to the prior one. The GPU quality has been really improved on Qualcomm chips over the year and Snapdragon 670 takes it to the next level as far as mid-range chips are concerned.

The current era we are passing through belongs to the bezel-less display or 18:9 aspect ration, even more, longer bodies smartphones. Considering the market demands, the company has provided Full HD+ display support to the Snapdragon 670, whereas, the Snapdragon 660 is restricted to the traditional Full HD display which translated into 1080 x 1920 pixels. 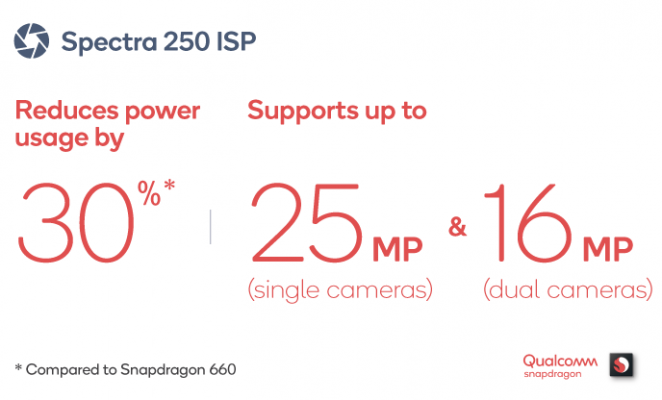 Moving further to the camera, both the SoCs are capable of handling max. 25 MP single camera or Dual 16 MP + 16 MP cameras. But it hides the real story. Megapixel isn’t the only factor which improves the camera quality, though there are many more. The Snapdragon 670 comes with the latest Qualcomm Spectra 250 ISP, which is way more advanced and better optimized than the Spectra 160, used on Snapdragon 660. Both of these carry basic Qualcomm camera features such as zero-shutter lag, hybrid autofocus, and Optical Zoom.

Both the chips offer LTE X12 Modem, which can provide up to 600 Mbps download speed and up 150 Mbps upload speed. At least in this department, there is no difference between both the chips. The one major difference is Dual VoLTE support simultaneously on Snapdragon 670, which snapdragon 660 lacks. It matters at least in India, where most of the people use two SIM cards.

This is a major upgrade from the Qualcomm in its 600 series, which brings latest and advanced technology for Snapdragon 670. However, performance wise both should be equally good for a common user, but the new chip improved in many fields like battery life, GPU, and AI capabilities. This is a good sign that all the major firms are understanding potentials of AI and making our smartphones more advanced. So, in our review, Snapdragon 670 is a clear winner and provide a better deal. The Snapdragon 670 smartphones making in underway and should hit the markets before the end of this year. If you are thinking to purchase a mid-range smartphone, then you should wait for the few more months.

Also Read: Snapdragon 670 vs Snapdragon 710 Comparison – Which one is better?