Vivo X20 series has already appeared several times on the web. What we know so far is that it will be having an 18:9 ratio full HD display on the front, Yesterday, we met with a video, that the revealed front and back of the device. Now, the Vivo official confirms that the device employs facial recognition technology that will help the device to unlock in 0.1 sec.

The company also shared the process to use Facial Recognition. To use that, you have to press the power button and double tap on the screen, rest will be handled by Face Wake or Face Recognition, whatever the Vivo call it. Moreover, Vivo had yesterday launched V7+ with the similar kind of utilizations, though we aren’t sure how would it be different from that. It will worth mentioning that the tech giant Apple is also working on that field to bring the same technology (Pearl ID) on its upcoming flagship iPhone 8.

Speculations have it that the Vivo X20 is going to feature 5.8-inch AMOLED display, 24MP selfie camera, 3,500 mAh battery, 6GB RAM and Android 7.1 Nougat out of the box. When it comes to the heart of a smartphone,  It would be either carry a Snapdragon 660 or 630 chipset under the hood. We can’t confirm the authenticity of given specs as these are market rumors. We have to wait for the official launch to make confirmation over the final specs sheet.

Update: An image of Vivo X20 has been leaked by confirming the Snapdragon 660 chipset and Android 7.1.1 OS! 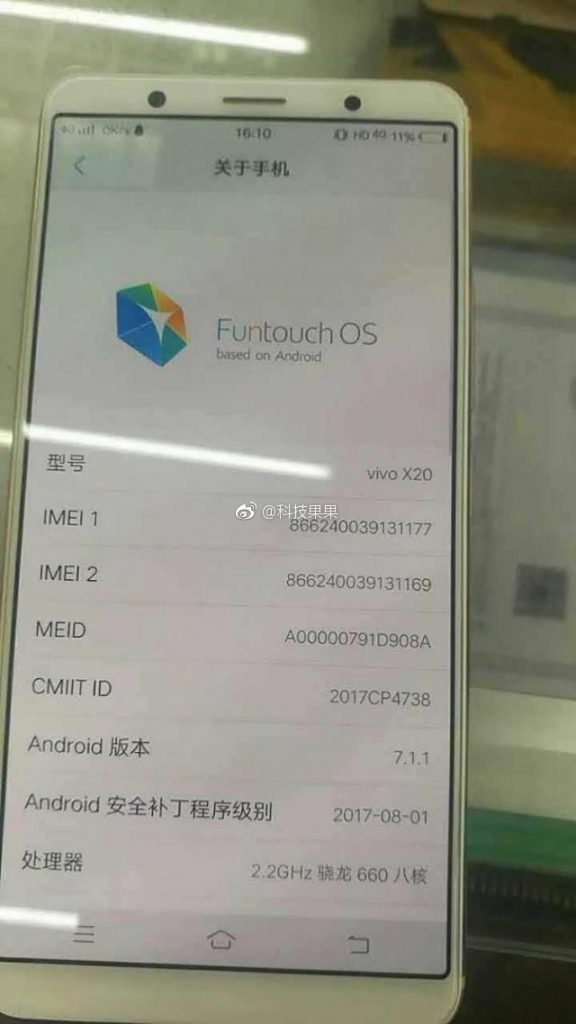 For further updates stay tuned with us!