Samsung officially unpacks a new device called Samsung Galaxy A7 (2018) (via: GsmArena) unexpectedly. The is a first smartphone from the company with triple rear cameras: 24MP primary sensor f/1.7 lens, an ultra-wide 8MP f/2.4 module with 120° viewing angle and a 5MP depth sensor. On the front, it has a single 24MP, f/2.0 shooter to capture the cool selfies. The device is powered by an unknown chipset clocked at 2.2 GHz, most probably it should be Qualcomm processor as the company did with prior models.

Further, the Samsung Galaxy A7 (2017) features a 6.0-inch 1080 x 2220 pixels Super AMOLED display without any notch, unlike the other competitors. It has a 3,300 mAh non-removable battery without mentioning of any fast charging support. The smartphone measures 159.8 x 76.8 x 7.5 mm and weighs 168 grams. Considering the sensors, it includes almost all the needed sensors such as Accelerometer, Fingerprint Sensor, Gyro Sensor, Geomagnetic Sensor, Hall Sensor, Proximity Sensor, and RGB Light Sensor. 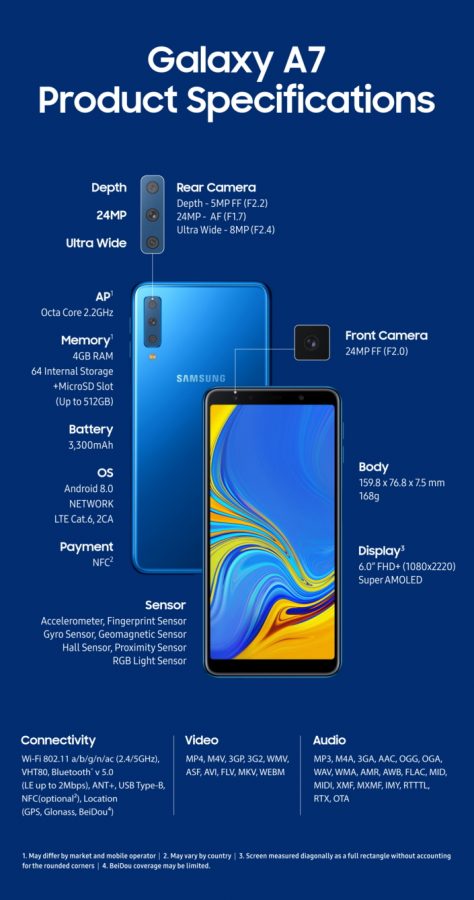 Moreover, it runs on Android 8.0, Oreo out of the box. A fingerprint sensor is embedded on the right side, which is an unusual place for the Samsung smartphones. As far as pricing is concerned, pricing details ain’t disclosed yet. The company is holding a special event for October 11, where all the details regarding pricing and availability will be unpacked.