Recently, we heard some news about Samsung’s development on Oreo Update for its flagship Galaxy S8. Now, the device has spotted with Android Oreo on Benchmarking site Geekbench. The listed device is using Exynos 8895, that means the update is currently being tested on Exynos powered S8. To recall, the device was launched with Android 7.0, Nougat and still, sticking to the same version. 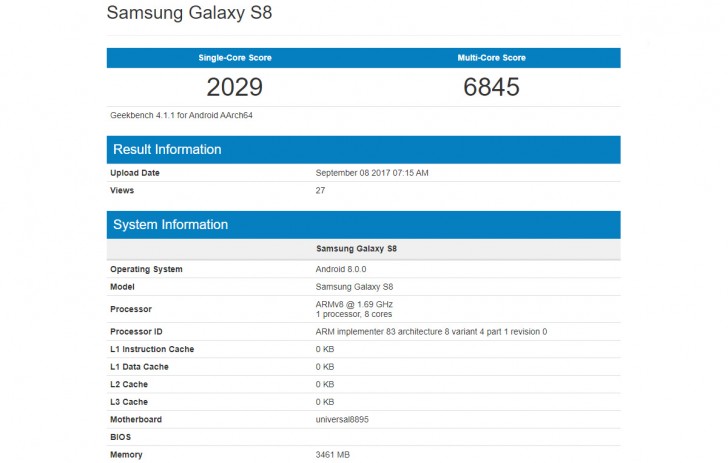 Usually, the company takes about 5-6 month from the actual launch of Android OS. unlikely, this time Samsung seems in hurry to provide the latest update to S8 users. Nevertheless, the company trying best for Galaxy S8, but there is no news about Samsung’s current flagship Galaxy Note 8. The Note 8 was either supplied with Android Nougat out of the box, but we can expect it will be the first device to taste the Android Oreo from Samsung.

Besides, S8 features 5.8-inch Super AMOLED Infinity display, 12MP rear camera, 8MP front camera, 3,000 mAh battery, 4GB RAM and 64GB storage. As we mentioned above, it runs on Android 7.0 out of the box based on TouchWiz UI. If you aren’t aware of, The Exynos variant available in all around the world except the US. The US variant is powered by Snapdragon 835 processor, Hopefully, would be getting the Oreo update at the same time as Exynos variant.