GlobeMobiles.Com
Home News Nokia 9 render disclosed front and back panel with having revealed some...

Recently, HMD Global had announced its first Nokia flagship dubbed as Nokia 8. Now, the company is planning to enhance the flagship range further with Nokia 9. Moreover, Nokia 9’s render (sketched) image has been surfaced on the web with showing both front and back. An upgraded version of Nokia 8 (kind of) is rumored to bring a refined design, which seems to be true going with the current image.

If the current leak is believed, Nokia 9 would feature a curved edges display and 3D glass back design. The display of the device resembles Samsung’s last year flagship S7 Edge, but with minimal top and bottom borders. 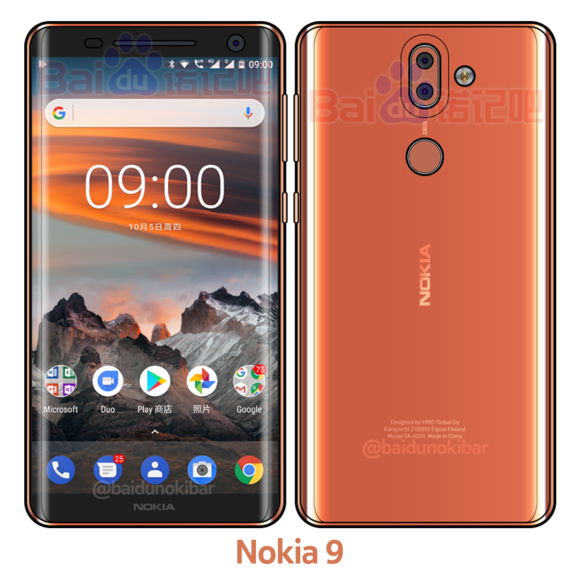 The back panel is surrounded by the dual vertical rear-facing cameras, whereas, the front has a single camera; similarly, we have seen on Nokia 8. And unlike the Nokia 8, the fingerprint sensor could be moved to the back side, due to providing extra usable screen. Apart from that, it won’t have any capacitive touch button and will use on-screen navigation keys.

The device is expected to bring 5.7-inch OLED display, Snapdragon 835, Dual-Lens Zeiss camera, 6/8GB RAM, 128GB storage, Android Oreo and IP-68 rated body to protect it against water and dust. Certainly, the device isn’t revolutionary by any mean, but seems to be a balanced package in the mid-range segment.

Apart from that, NPU suggests its price to be around 749€ in European markets. However, all these are market rumors, therefore you can take it with a pinch of salt. For final confirmation, we have to wait for official launch.