Yesterday, we had reported about Huawei Enjoy 7S, that will be official on December 18. Now, yet another phone from Huawei’s sub-brand gets press invites. The Honor 9 Youth Edition or Honor 9 Lite going to be announced on December 21, confirmed by company’s official Weibo account.

A few days ago, the device was certified by TEENA by unveiling all the key specifications. According to TEENA specs sheet, the device will be featuring 5.65-inch display (18:9 aspect ratio) at the resolution of 1080 x 2160 pixels. The device will be powered by company’s own mid-range chipset; the HiSilicon 659 ARM with Mali-T830 MP2 GPU. In terms of storage, it will have two variants 3/4 RAM and 32/64 GB internal storage respectively. Regarding the camera, the headset will boast dual rear cameras (13 MP + 20 MP) on both rear and front sides. 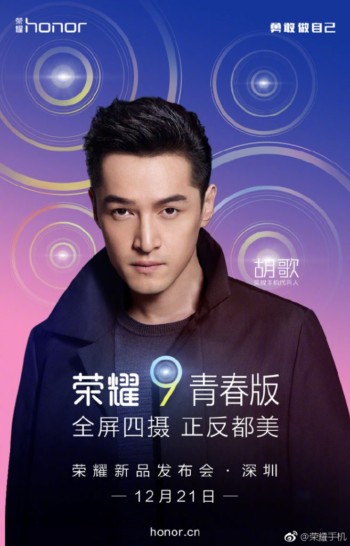 The device will be operated by Android 8.0, Oreo, based on company custom EMUI. A 2900 mAh battery will back the operations to keep the lights on. As far as price is concerned, the device is expected to start price from RMB 1,299 ($195), that will go up to RMB 1,599 ($240) for higher 4 GB RAM variant. All in all, the device stands very near to Enjoy 7S expect the cameras.