The Samsung Galaxy Note is not far away to be announced officially, Yet we have got an another confirmation in the form of FCC certification. However, the device has been already certified bringing the model number SM-N950U1, SM-N950XU and SM-N950W respectively, Now, it’s the turn of Korean variant to get approval. A new device with FCC id number “A3LSMN950KOR” passes through FCC. One of the biggest difference is that this phone will use a virtual FCC ID built into the device’s software because it employs the FCC E-label technique. Meanwhile, FCC ID label will be embedded into the bottom of the phone on remaining models which was recently approved by the FCC. 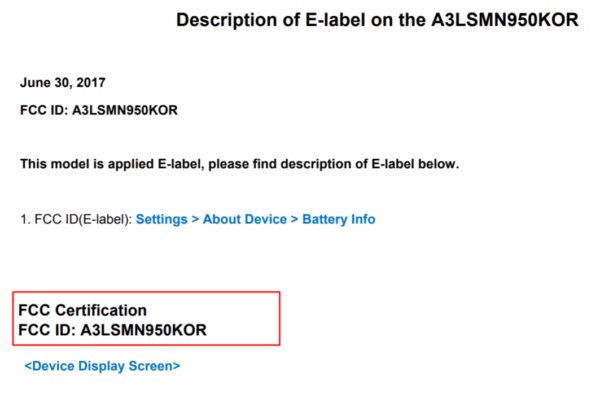 However, the listing doesn’t reveal anything special which we don’t know so far. A few days ago, the nutritious tipster has revealed almost all the needed specification of the forthcoming device. Accordingly, It will have 6.3 inches QHD+ 18.5:9 aspect ratio display, 6GB RAM, 64GB storage, 3300 mAh battery, dual 12MP rear cameras, 8MP front camera and Android 7.1.1 OS. Apart from that, The device is likely to arrive with two different processor – Snapdragon 835 (specifically for the U.S.) and Exynos 8895 (International variant) while Korean variant will most probably get Exynos powered units.

Needless to say, The device is scheduled to be unwrapped on August 23 at an event in the New York. Let us know whether you’re planning on picking one up whenever it goes on sale.