The LG is looking all set to unveil its most anticipated smartphone of this year called LG V30. As there are several leaks already there in the market by covering all aspects of the LG’s upcoming flagship, today a new series of renders that are believed to how LG V30 will look. The new leak gives us a full idea of how V30 will look alike. The renders coming from OnLeaks, showcased full side by side design on V30.

The rear portion of the device flaunts a dual rear camera on the top middle of the handset along with fingerprint scanner under it. Moving to the bottom, it has added USB Type-C port included some grill which could be setup for dual speakers or a traditional speaker and a primary microphone. The good think is still LG didn’t remove 3.5 mm audio jack which is placed on the top of the device. Overall, the device seems quite similar to LG G6.

Here comes ur very first look at #LGV30 (360° video + dimensions based upon factory CAD) on behalf of @MySmartPrice https://t.co/UkFC4GzHoV pic.twitter.com/Fql56gJZRX

The device dimensions are said to measure 151.4 x 75.2 x 7.4 mm whereas a 6 inches display assigned on front, revealed rendering. As we know, secondary display is eliminated on V30, release date has already been revealed which might take place on 31 August. The phone is said to come with 32/64/128GB storage options, but 32GB variant does not make sense in 2017 for a flagship device where some mid-ranger is offering minimum 64GB built-in storage. 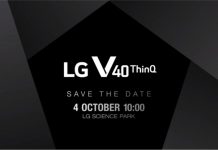