Yesterday, we had reported about a nubia smartphone that was caught in a rendered image. If you aren’t aware of, the company has officially confirmed that they are working on a device that will offer 2:1 (18:9) ratio display. Today, the company has criticised so-called Bezel-less smartphones.

According to a tweet made on company’s official Twitter handle, four smartphones are listed by stating “Stop calling them bezel-less.” The first one in the list is the Sharp Aquos S2, that was announced recently, and the company claims to offer 87.5%, but doesn’t seem to be true. The 2nd one is this year’s most popular device – the iPhone X. However, Apple didn’t make any claim about the screen-to-body ratio but being highly marketed as the Bezel-less smartphone. Furthermore, 3rd phone booked for Mi Mix 2, and 4th place is held for Samsung Galaxy S8.

By doing so, the company is indirectly hinting not only to share higher screen-to-body ratio, but it should also be narrower bezels or can it be transformed into true bezel-less? Anyway, it is too early to predict anything about the company’s planned smartphone.

According to recently leaked information, the device should be codenamed as NX595J, presumably to bring 5.73-inch display with 18:9 ratio. Additionally, we have no information available neither its specs nor the availability schedule. What do you guys think? Let’s know in below comment section! 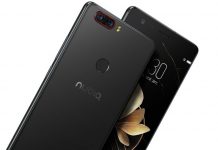 Full screen Nubia smartphone to be unwrapped on October 12, confirmed by official invites 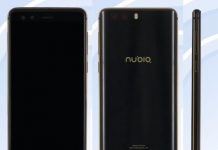