A couple of months ago, The Chinese firm Xiaomi had announced its flagship smartphone Xiaomi MI 8. The company also unpacked Xiaomi MI 8 Explorer Edition with transparent back leaving all spectators in surprise at the same time. The interesting part of this device is that it discloses some internal components including motherboard, although later it met with a hot controversy of faking it with stickers. Soon after, Xiaomi officially confirmed that all the components visible under transparent back are real. Now, the device is finally ready to be released in home country China.

According to the Xiaomi officials, the device will be up for sale on company’s official online store starting from July 30, 7:30 local time by pricing it 3,699 CNY, which roughly converted into 545 USD or 37,500 INR. However, No information available regarding the number of units for sale, but it should be restricted to limited users. The device comes in silver color, and it is company’s first device to bring Face ID feature, that uses 3,000 coded dot matrix projected by a dot matrix projector to recognize the facial expressions. To enhance the security, it also features under the display fingerprint scanner. 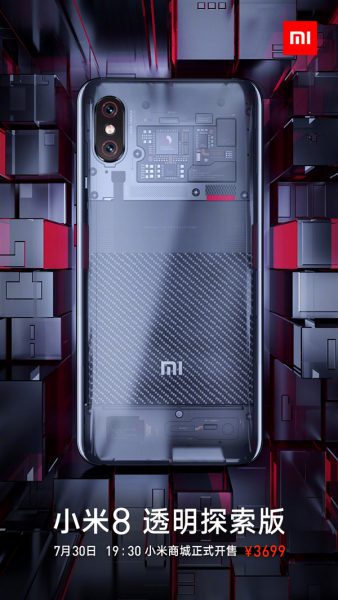 The Xiaomi Mi 8 Explorer borrows most of its features from the original Mi 8. The handset is powered by Qualcomm’s Snapdragon 845 processor coupled with Adreno 630 GPU. It features 6.21-inch 1080 x 2248 pixels Super AMOLED HDR 10 compatible display covered with Corning Gorilla Glass 5. The internal storage is 128 GB paired with 8 GB of RAM.

The Mi 8 Explorer Edition has comparable less 3,000 mAh non-removable battery, whereas, original MI 8 boasts 3,400 mAh battery. It runs on Android 8.1 on the top of the company’s custom MIUI 10. The optics department is handled by Dual 12 MP + 12 MP cameras and front side gets a 20 MP shooter for selfies. It has all the necessary connectivity features including Bluetooth 5.0, Wi-Fi 802.11 a/b/g/n/ac, GPS, NFC and USC Type-C 1.0 port, but lacking 3.5 mm jack.

If you really want to pick one up? Let’s know in below comment section!