OnePlus is ready to launch its next flagship allegedly named OnePlus 5. Rumors leaks already coming from last couple of months. Now it has got listed on oppomart by showing its full specifications and price. OnePlus’s last year flagship OnePlus 3 and OnePlus 3t are enjoying their massive success and people are waiting eagerly for next OnePlus. 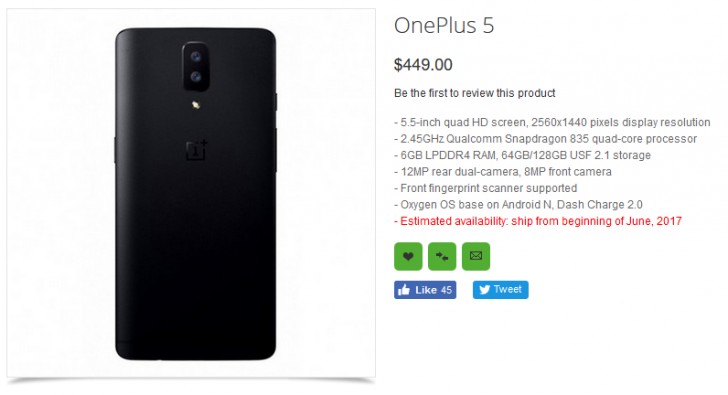 Anyway moving to main point, listing suggest the OnePlus 5 will be powering by Snapdragon 835 processor, as expected. It will come with 5.5-inch Quad-HD display at 1440 x 2560 pixels . As far as storage is concerned, it could pack up to 128GB inbuilt storage coupled with 6GB RAM. But their are another rumors by claiming 8GB RAM OnePlus 5 and 3500 mAh large battery under the hood.

The listing also claims its arriving in June with $449 price tag, Which should be acceptable to everyone if OnePlus launch that device at this price point. However, these are not official specifications so as of now you can take it as pinch of salt. These rumors are already in market so nothing new in this listing.