Google’s Pixels series is the company’s flagship series, where Google provides a strong hardware along with stock Android experience. The latest smartphones of Pixel series have already been in light for the last few months. Presumably called Pixel 3 and Pixel 3 XL have been subject of a large number of leaks and rumors. To extend it further, The Pixel 3 XL surfaces on benchmarking site GeekBench. 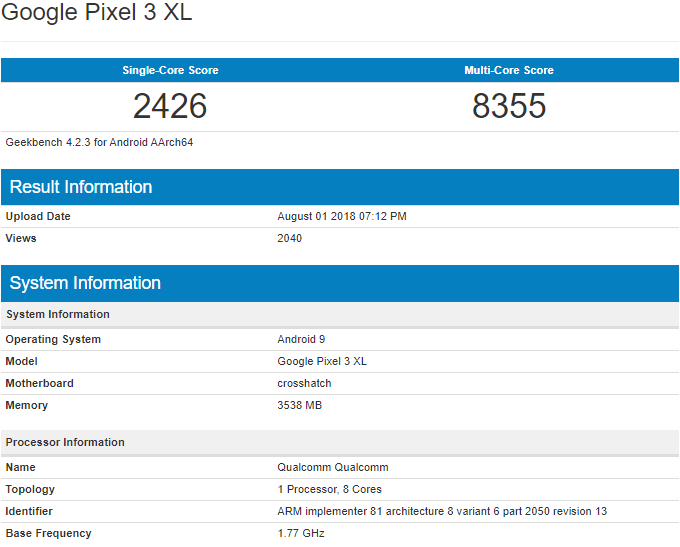 As per the Geekbench listening, The Pixel 3 XL will have Qualcomm’s Octa-Core processor, most probably Snapdragon 845. The handset is likely to bring the latest Android P version 9.0, which is expected to be official this month. Furthermore, the device scores 2,426 in the single-core result, while, the multi-core score stands at 8,355. The RAM is given 4 GB. Apart from that, there isn’t any other specs disclosed by the Geekbench as always.

Some recent rumors suggest that the device will be unveiled somewhere in October but we don’t have concrete evidence to prove. Last year the Pixels series was unpacked in the first week of the October month, so it might be true. All in all, we have to wait for a few more days to know more about these devices.